Peyton Burdick Is Raising The Bar In 2020 As we get into the thick of Marlins Spring Training, with just a few weeks before Minor League camp starts, more and more minor league players are finding their way to Jupiter. “Back field work” is something that brings me more joy then maybe anything else in baseball. It’s a chance to see the next wave of talent that looks to start the process of being a championship franchise.

One of those players is coming off an extremely impressive first pro season and is looking to stake his claim as not only one of the next breakout players in the Marlins system, but in all of baseball. I was sat down after camp this weekend with the outfielder before he had to try to get the best bedroom at his Airbnb: It’s Marlins’ 3rd round pick, Peyton Burdick.

It’s easy to look at a player who has the build of a swole Mike Trout and get excited, but it’s what you see on the field that’s actually the pièce de résistance.

What Peyton did to the Horizon league in his years as a Wright State Raider is downright disrespectful:

Now look at a couple of these Exit Velos from his final season apart of the Raider Gang:

To put in perspective how hard those balls were hit, there were only 20 balls hit in the the entire MLB last year hit harder than Burdick’s two hardest hits at the top of the chart.

Burdick did all of this while rocking #88 on the jersey (which, personally, I think is dope) and the reason why is special.

“It’s kind of a generational thing,” Burdick told me. “My brother, who’s a year older than me, and I played all our sports together growing up. He tooks my dad’s baseball number of No. 8, but my dad also played football at Toledo and for the Seattle Seahawks for a year and wore No. 88, which my grandpa wore before him. I kept the tradition going.”

Big power, speed, and advanced plate discipline are tools you dream of, even if they come from a small school. Still, after those numbers, it’s what he did in the Cape Cod league that summer that took his draft stock to another level. Burdick took the wood bat and mashed three homers on opening day in route to a .252/.351/.435 season with 10 extra base hits, 24 RBI and 6 steals against the best pitching he had seen his entire collegiate career.

The redshirt junior made Miami’s decision easy with their 3rd round selection in the 2019 MLB draft.

When I asked him what his best moment of his first pro season was, Burdick said, “Hearing my name called on Day 2 was so rewarding. You do all the work to get that point. Having my family there with me, knowing the sacrifices that they made my whole life to get me there, was just everything we worked from.”

While starting your pro career should undoubtedly be your highlight of your first season, I think Peyton is humble in the sense that he had such an extremely impressive debut in the Marlins system and could have easily talked about his performance on the field.

Seeing the playable power that came from his violent swing made it easy for me to see why he is being graded 60+ on his raw power from nearly every outlet before the draft, but some small tweaks to his approach may have taken it to another level.

“Everybody is here for a reason,” he said. “You’re seeing people throw harder and better pitches all the time, and I needed to find myself and what worked for me in pro ball. I just trimmed some fat from my swing and tweaked a few things to just make it simpler.”

Simple has resulted in stronger. Burdick’s hands got a little higher driving the barrel of the bat lower, and it now showcases the bat speed he brings when he gets in the box. Those tweaks lead to some eye-popping numbers in Low-A Batavia and, more importantly. in Class A Clinton.

It’s easy to be bullish on college bats when in the lower levels of the minors, but what the slugger did as a Lumberking in 2019 is hard to ignore:

Those stats exactly what you want to see out of a pro debut. Burdick’s numbers were good enough for Top 5 in OBP, SLG, ISO and wRC+ (min. 200 AB), all while helping Clinton win their first division title since 2016 — their first as a Marlins affiliate. Furthermore, he impressed the Marlins front office enough to be named Class A MVP after his season.

“It was a great experience starting your career with some success. It definitely made the transition a lot easier” Burdick said, humbly deflecting, wanting to focus solely on his first full pro season coming up here in 2020.

I couldn’t let his success last season slide that easy though, so let’s dive into why the Batavia, Ohio born slugger was so good in 2019, and how he could be better this year.

First, let’s talk about an underrated part of his high on-base numbers, and that’s his ability to get plunked…

He even got hit in the simulated game on Sunday. Oof.

His ability to attack the zone with his swing while being nearly on top of the plate cuts off a pitcher’s strike zone by quite a bit and has led to an impressive BB%. I don’t see his approach at the plate becoming any less fearless, so expect the OBP numbers to keep climbing if he can stay healthy while being hit so much.

Now, let’s get to how he impacts the ball.

Batted Ball ratios from low A to A ball:

Seeing that flyball rate soar and ground ball rate plummet is always a sight for sore eyes, but when you look even deeper, it’s what Burdick did with those ratios that shows the value especially when he got some life on the ball.

In Clinton, he had 66 PA where he hit a fly ball… The results? 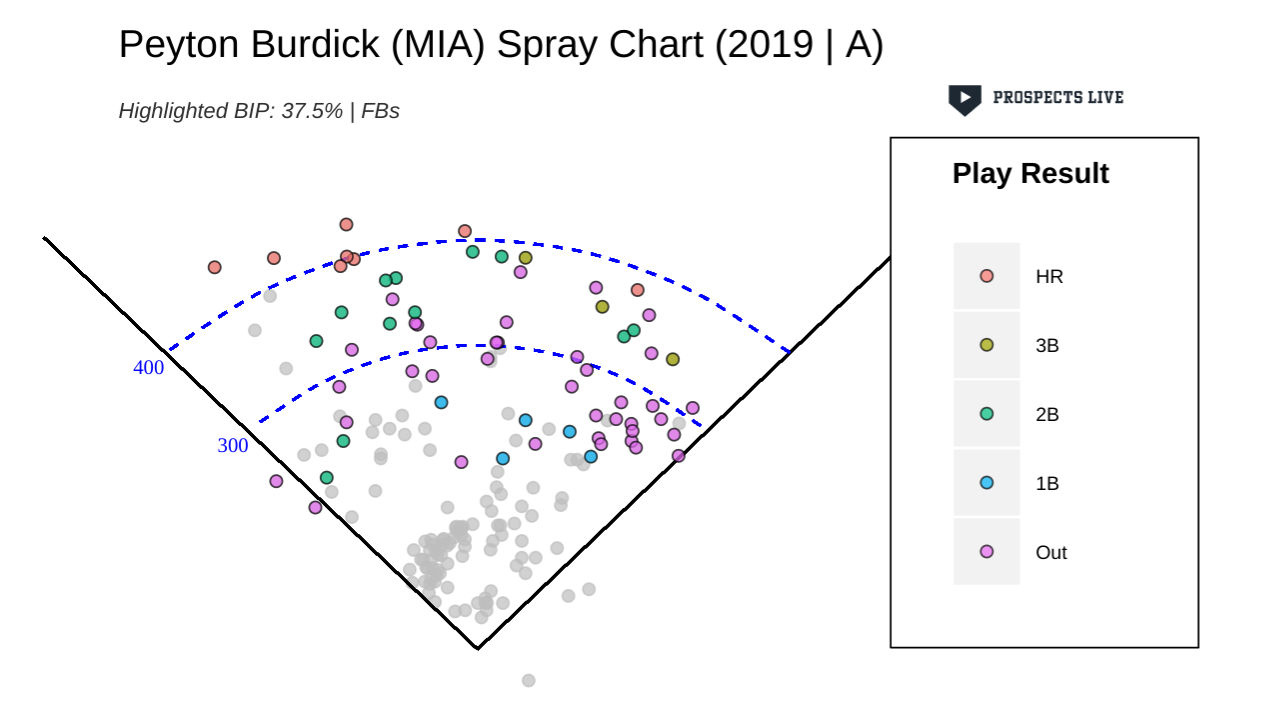 the wall. Legit raw power that plays in game situations. Just look at this swing. Ive decided its controlled violence in the best way possible.

Every single one of these left the yard. @Pburd88 is showcasing his double plus Raw Power 👀 #Marlins @Prospects365 pic.twitter.com/qPfoYXsWyk

The amount of moving parts in his swing has led evaluators to have some swing and miss concern going forward as he moves up levels, but I don’t really see it. He struck out a modest 23% of the time in 2019 and added a nearly 11% walk rate to counter it. I even believe that K% will stay there or even dip as he progresses. His patience last year was impressive when you look at his numbers when he was behind in the count.

Trusting his hit tool and process at the plate led him to control at bats in any count. A quote that’s stuck with me from when we talked was, “Whenever you think you have baseball figured out, it just turned around and snaps on you.” It’s that willingness to embrace the struggles and successes that I believe will help him continue to build on what could be a special career.

Finally, that leads me into what i’ve learned about Burdick’s first pro off-season that has me this excited for his future.

Last season, I was only able to get one live look at Burdick and that came during Instruct day at Marlins Park this past September. I saw one of the loudest sessions of batting practice that I had ever seen by a minor league player, and it was easy to see why when he had the physique of an NFL running back. Yet, as I walked back to practice field 4 at Roger Dean, I noticed a newly turned 23-year-old who somehow got even bigger, and I needed to know…how?!

This led me to “Elite Strength and Conditioning” in Maineville, Ohio where Peyton does his off-season training. ESC is a facility that focuses on using a program that is strongly based on flexibility and range of motion and finding ways to reach top tier performance without risking long term injuries.

I asked Burdick how the facility has helped him evolve as a player, and he instantly named owners Josh Elleman and Garrett Stoller as massive influences.

“They really know what they are going up there,” he said. “[They have] close to the same guidelines that the Marlins are looking for. They really let you grow as a player and a person. Helping my baseball game by being able to pack on some more pounds and add some flexibility.“

Knowing the type of athlete Burdick is (and then finding out his brother Tyler is a Marine who is currently stationed in India), I reached out to Elleman and Stoller to find out what kind of savage he is in the gym. I was not disappointed with the statement they send me.

“Peyton was hands down the hardest working pro we had this off-season,” they said. “[Burdick] changed the definition of a gym rat by bringing an energy every day that everyone including ourselves could pick up on. A fierce competitor that brought the ‘football mentality’ to the baseball field, he would never let you miss a set and took the occasional loss in the end of day HR derby’s personal. His leadership was felt throughout the entire facility, always going out of his way to make the younger kids feel like pros. [He] went out of his way to be there for the kids and they absolutely loved it.”

Hearing such a ringing endorsement from people who got to see the real Burdick day in and day out was just refreshing. An old-school grinder who brings 100% effort in all aspects of his life is absolutely the type of player you want in your clubhouse.

What to Expect Going Forward

Off the field this off-season, Burdick made big strides in the organization by being a part of Captain’s Camp along with the majority of the Marlins top prospects before Spring Training.

“The ability to work with and listen to great mentors while learning the values of the program was great. The focus on being a good teammate being forefront as well,” he said.

It’s going to be exciting to see what Peyton Burdick can do for an encore in 2020. I feel comfortable saying I believe he will start the year in High A Jupiter, which means an automated strike zone. He didn’t seem too worried about it.

“I’ve heard some good and bad about the automated zone, but it will work itself out. Baseball always does.”

Ever so often you get drawn to a player, for whatever reasons, but when you really breakdown and see the type of person Peyton Burdick is, it’s easy to see why I see such a high ceiling for him. If we see this mentality and effort continue, he could potentially be a top prospect by 2021 and eventually be looking at a future middle of the order “.280 with 30 + home runs” type of hitter that Miami could desperately use in Marlins Park.